I have published and lectured widely on various parts of Hegel’s system, Schelling, Novalis, psychoanalysis, and phenomenology. I also work as a translator of German and French. Most notably, I recently published a co-translation of excerpts of Schelling’s late lectures for The Schelling Reader and am working on the first English edition and translation of Schlegel’s lectures Transcendental Philosophy.

I obtained my Ph.D. from McGill University under the supervision of George di Giovanni and Hasana Sharp. Prior to this, I completed M.A. studies in French and German through the prestigious Erasmus Mundus Europhilosophie program. In the context of the latter, I studied at Université catholique de Louvain (Belgium), Bergische Universität Wuppertal (Germany), and Université Toulouse II (France).

Outside of philosophy, I can usually be found roasting coffee or playing video games.

My major book-length publications are: 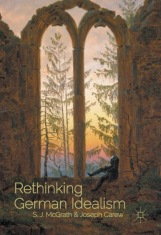